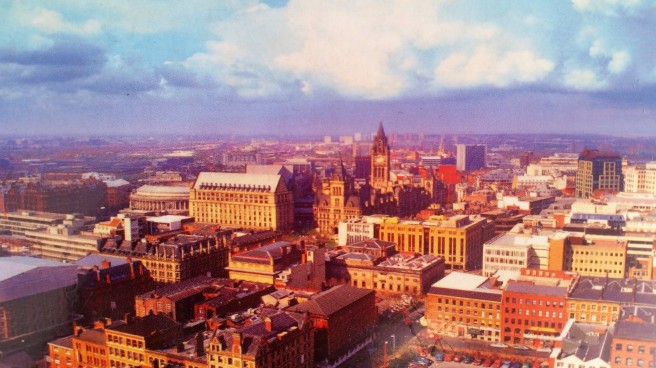 After three years of studying (yeah right) at Manchester Uni I decided to stay on another year. I couldn’t get enough of the Northern drizzle: gobs of fumey water threatening to turn everything grey. Sometimes the sun would appear and a bright blue would cover the city, lighting up the red brick of the warehouses.

I arrived in 1996 when a bomb planted by the IRA had gutted the central Arndale Centre. Terrorism in England in the twentieth century was all about bins in railway stations, bombs in Wimpy Bars, the targeting of political buildings. Scary yes but somehow in parallel with normal life. Not at its centre.

Manchester is the setting of Tariq Mehmood’s recently published novel, Song Of Gulzarina, an absorbing read which travels between the North west of England and Pakistan along with the main character, Saleem Khan.

The story picks up pace at a mill, in an incident involving unsuitable toilets at Saleem Khan’s workplace. The Pakistani workers request sanitary facilities. The white British manager, Mr Andersen abuses the men:

‘You filthy Paki bastards always sticking together.’ Mr Anderson picked up another pipe and hit Salamat Ali Teka across the face.

This racist violence paves the way for Saleem Khan’s journey through pain, into war, loss and eventual expatriation.

Love features too as Saleem falls for Carol Anderson, the daughter of his boss. One of the most enjoyable parts of this novel is the way the writer has his characters speak. As Carol and Saleem chat, she responds to Saleem by speaking to an invisible onlooker:

‘How did I find out, he says,’ she said leaning back into the setee.

Her turn of phrase is real and affecting betraying something deeper than its outward flippancy. In fact I was originally drawn to review this book after Tariq Mehmood’s humour showed up on a mutual facebook friend’s page. Mehmood has a gift for pithy – often witty – dialogue switching between registers with pitch perfect precision.

A few years ago I attended a workshop on writing dialogue at the Winchester Writers’ Festival. The take-away was that speech in literature is artificial but you have to make it sound plausible; each character should appear authentic and different (try it – it’s not an easy task!) Tariq Mehmood gives his characters language which is earthy, often coarse and angry and it makes his characters visceral, believable.

The sense of place in Song Of Gulzarina looms large. Not just in Manchester where:

The white pigeon with a black circle around its left eye is now perched on top of one of the toll gates, oblivious to the cold Mancunian wind.

but also in Pakistan where the depth and sensuality of the detail reminded me of Aravind Adiga’s descriptions of Bangalore in The White Tiger:

‘Other than the smoke from the exhaust of a rickshaw, nothing hit us.’

The final section of the book – please look away if you don’t want a SPOILER – takes the character of Saleem Khan to a darker place.

If the book begins with racist humiliation, it ends in exile. The distancing of our hero from his own humanity, hell-bent on revenge, his heart closed and life little more than an alcoholic blur.

Ravaged by the losses of his wife, girlfriend, cousin, the disdain of his daughter, Khan’s heartbreak has turned its face upon the world. He plans to avenge his disillusionment on the British ex Prime Minister, Tony Blair who has come to Manchester to speak. Strapped to Khan’s body are enough explosives to take out far more than the former PM.

In this last section, the reader is kept on tenterhooks as Khan wanders around Longsight and Wilmslow Road in this state ready to activate the mobile phone at any moment.

That our protagonist chooses Tony Blair as his target is unsurprising. There is a terrible irony that much of the IRA terrorism mentioned above was curtailed by an agreement in 1998 of which Blair played a significant part. Five years later, the invasion of Iraq and all of its rhetoric served not only an illegal war but a media machine which placed people like Saleem Khan in a cold and terrifying place.

Cast out by a British government acting with unspeakable hypocrisy, it is easy to understand why Fight or Flight became, for some, a way of life.  Add in the United States response in Afghanistan to the 9/11 attacks, and terrorism becomes a very real language. ‘We are here,’ cry the suicide bombers. ‘You thought you could ignore us. But: ‘Look at me. I’m the captain now.’

That Khan’s decision to blow himself up is not associated with his religious beliefs but a quest for social justice is significant. In fact he declares himself an Atheist, his faith has long since died. “Never contend with a man who has nothing to lose.” wrote Baltasar Gracian in the 17th century. Saleem Khan’s self-rejection is so complete, hope so long-gone that he will go to any lengths. His radicalisation has come not from religious rhetoric but from the sense that he has nothing left so nothing will be lost when he kills and dies.

For this is a novel about alienation, about looking for home and finding only estrangement. From the woman who treats Khan at Manchester Royal Infirmary and comments with horror at the amount of hair on his body to his close white friend who runs away as they watch the events of 9/11 unfold on the telly, Saleem Khan is left without sanctuary.

Mehmood skilfully navigates the nuances of Islam in the West. When Khan’s daughter Aisha is aggressed by men in a passing car, the Muslim youths outside the mosque stand impassively. Khan chastises them:

‘How can you just carry on selling books?’ I ask the bearded youth, pointing a shaking finger. ‘You saw what they did to your sisters.’

The youth replies that all will be taken care of in the Hereafter – a view which ignores traditional Islamic belief (which highlights the importance of balancing both Earthly matters and a spiritual focus on the next life) – and instead of helping his Muslim sister, uses fundamentalist religious rhetoric to do nothing.

Towards the end of the book, Khan remembers seeing a snake as a child and playing with it until he was urgently warned to move away. As he walks, in the present tense, through Rusholme with explosives strapped to his chest, he recalls his mother telling him of how casually he toyed with the serpent. The adults were afraid of the creature because they had experience but the child was safe in his innocence. Nothing had caused him to prejudge it, to antagonise it and the snake did not attack.

Tariq Mehmood has written a powerful tale and his voice in the current political climate is important. Through a strong sense of the spoken word, an under-heard narrative gains momentum. This book is pure entertainment but it is also a cautionary tale. A question embedded in a Song. What happens when people are ignored and suppressed for too long? Where does that energy go? It is the reader’s gain that this particular writer has put his own spark into Song for Gulzarina.

5 thoughts on “Speaking in bombs: Book Review – Song of Gulzarina by Tariq Mehmood”